Skip to content
Give it a shot - 30 Day Starter Plan

Yes it’s true! Your gut affects your mental health! Current thinking in the study of mental health problems includes strong speculation that bipolar disorder, schizophrenia, and other psychological or neurological problems are associated with shifts in the microbiome.

The same is true of ADHD drugs. Although children are still the primary users of these drugs, the number of adults using them has been increasing at a much faster pace lately. The percentage of kids taking them increased 18 percent between 2008 and 2012, but during that same time period the percentage of privately insured adults who take them skyrocketed 53 percent. I am saddened by the fact that the billion-dollar psychotropic pharmaceutical industry is predicated on the idea that people will take a pill to treat symptoms, while the underlying disorder is ignored. So there’s never any real focus on actually curing or even improving the root cause of the illness, let alone getting people off the medication.

But these medications do not treat mental illness. Whether it’s prozac, Cymbalta, Zoloft, Elavil, Lexapro, Wellbutrin, or any of the other commonly prescribed antidepressants, these medications simply treat symptoms, and only minimally so. We need to focus on understanding the causes of mental illness, so that we can find real treatments and cures that don’t involve potentially dangerous drugs with serious side effects.

A number of mechanisms are at play, including the direct effects of gut bacteria on the intestinal barrier, and their effects on the production of neurotransmitters that impact mental wellness.”  Dr David Perlmutter 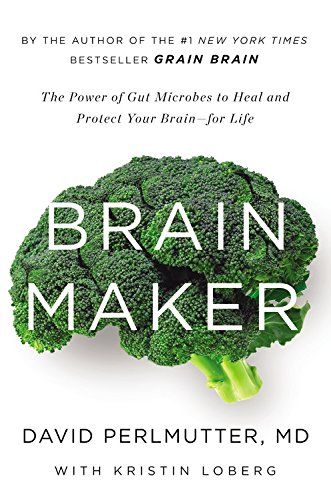 The belief that gut health is connected to mental well-being dates back more than a hundred years but the interest in gut health has never been stronger and the exploration into the gut microbiota has revealed a close relation between behavioural issues, mood, and bacteria imbalance.

Research has shown the gut microbiota influences brain chemistry and behaviour. For example, people who suffer from irritable bowel syndrome (IBS) and the associated cramping, abdominal pain, bloating, gas, diarrhea, and constipation, commonly suffer from depression and anxiety as well.

The intestinal wall is our border with the outside world. Because the gut is where things from the outside (like food) are absorbed inside our bodies, the intestinal wall is designed to handle many types of interactions with foreign matter. Considering the functions of our gut, it makes sense that most of our immune cells are located in the gut. Further, the gut is home to our microbiome, the trillions of beneficial microbes that live inside our gastrointestinal tract. When a potential threat is sensed in the gut, large, far-reaching inflammation occurs. This inflammation can travel directly from your gut to your brain. 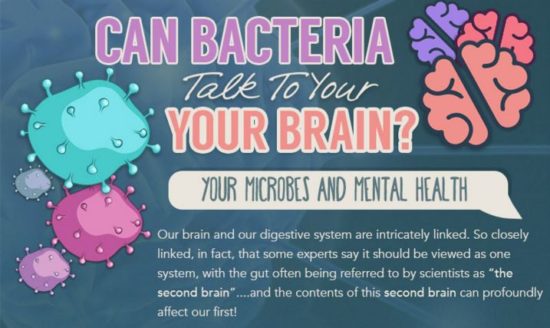 Inflammation of the gut has been linked to causing several mental illnesses including anxiety and depression, which are prevalent in society today. We are all at risk of chronic, silent inflammation. We eat foods that are processed beyond recognition, are sitting inside offices and cars most of the day, and are exposed to thousands of modern chemicals. Factors such as antibiotics and other medications, chlorinated water, certain foods, and stress all play a part in determining the diversity and balance of the gut bacteria and, therefore, the set-point of inflammation.

The neurons in the gut are so innumerable that many scientists are now calling the totality of them “the second brain”. You may be surprised to find out that an estimated 80 to 90 percent of the amount of serotonin in your body is manufactured by the nerve cells in your gut. In fact, your gut’s brain makes more serotonin – the master happiness molecule – than the brain in your head does.

Gut microbes help control inflammation. The balance and diversity of gut bacteria regulates how much inflammation occurs in the body. Healthy levels of a variety of good bacteria limit the production of inflammatory chemicals in the body and in the brain.

When the beneficial bacteria within your microbiome are weakened or damaged due to stress, the integrity of your gut lining can become compromised, making you more susceptible to exhaustion, nutritional deficiencies, inflammatory conditions, depression, or anxiety. By correcting the balance of bacteria in your gut, you can better handle stress, improve your mood, and even treat your anxiety or depression.

Naked Biotics are the most natural possible form of live bacteria, balancing and optimizing gut functionality and correcting imbalances.